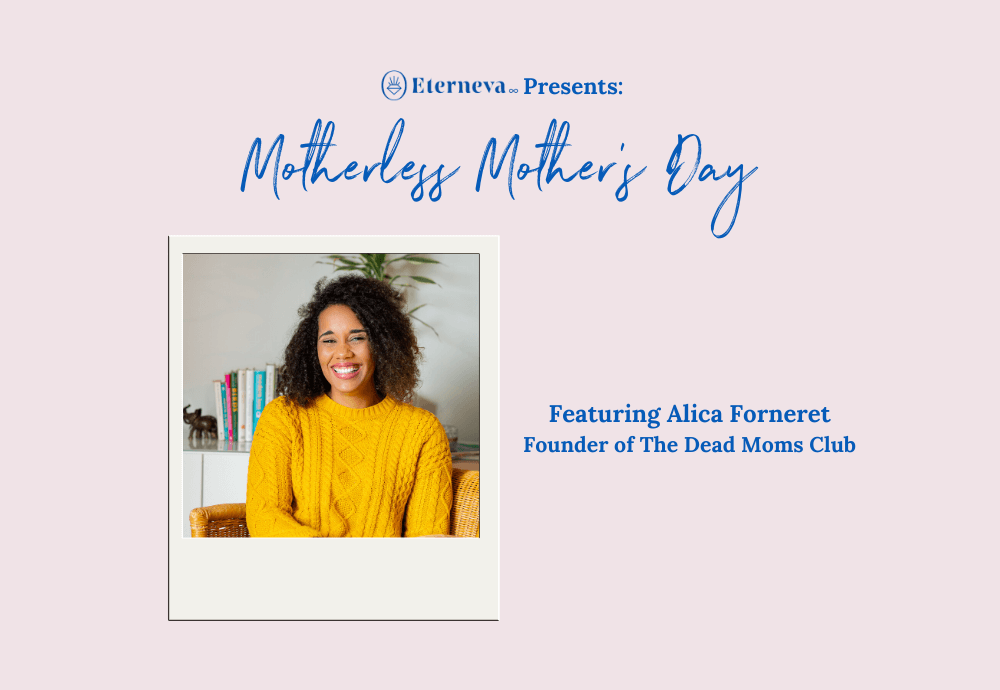 Mother’s Day and Mother’s Day weekend is a challenge for those of us who have lost our mothers. Some brands, like Jeni’s Ice Cream, allow you to opt-out of their Mother’s Day marketing messaging, but for the most part, there is a constant barrage of reminders about what you don’t have –– and what you could be doing if you did.

It can be a challenge, and one that Alicia Forneret, founder of The Dead Moms Club, knows well. Her company aims to bring those grieving their mothers together, in person or online, to share the experience.

And, she regularly hosts A Motherless Mother’s Day, typically held in person but online this year because of COVID-19. The list of events is impressive, from yoga and pilates to cooking classes and conversations with authors, you won’t want to miss the three-day line up to bring together a community that forms a club none of them really want to be a part of.

Dani: Thanks for being here, Alicia! Let’s start by having you introduce yourself!

Alicia Forneret: Yeah! So good to see you, and hello everyone! My name is Alicia and I’m the founder of the Dead Moms Club.

I’m definitely not the first person to join! I am instead someone who has started building more of an online and physical community around the fact that when our mom dies, we sort of join this club.

I always say it’s not a club that you want to join, and it is a club that some of us joined early. For those that do join early, like myself, I’ve found that unique support systems are crucial and have been incredible for my own grief.

It is focused on 32 different ways over three days that people can support themselves through their grief on this particularly hard weekend.

In addition to that, I’m a writer by trade, so I run a blog called Grief Is Hard AF. I also create resources like ebooks and tip sheets and checklists for people who are grieving or supporting someone in their life who is grieving.

Dani: We’re almost two months into this series, and something that keeps coming up with grief is that when you experience grief with people that are in the same place as you, that’s a really amazing support system. Is that how it’s felt since you’ve started Dead Moms Club? Has that given you the lift you need or the help?

Alicia Forneret: Yeah. It definitely was born out of when my mom died, someone telling me, “Oh, you’re in the club now.”

I realized really quickly that there were going to be things that I experienced later on in life, and as I navigated grief after my mom’s death, that were going to be really unique to not having my mom around and as being a motherless daughter.

So, it’s been really important specifically to connect with people through resources and conversations and events like Motherless Mother’s Day where you feel supported about a very specific loss that is very unique.

Dani: How have you gotten better at kind of acknowledging some of the pressures and the thoughts that pop up during this time?

Alicia Forneret: Yeah, I wrote about that in my newsletter this morning!

I have honestly gotten better at it because people like my husband or my dad or my friends point out signs they see when I’m experiencing stress or are overwhelmed or am getting burned out. It’s made it easier for me to identify what it is that I am struggling with and how to deal with it. I think, for example, I work a lot. I work a full time job, and I do all of my grief work. I also volunteer and I’m on boards.

One of the things that has become really important is having someone in my life who can say to me: “You need to just shut your computer today. You need to just take a walk right now.”

When I have someone point that out to me, I can sit there and say, “OK, what is it that I’m doing right now to make it clear that I am dealing with something and that I need to like take a break?”

All of that to say, having other people point it out has made it easier for me to identify that within myself. So, I’m getting better at knowing I need to take a break before somebody has to tell me that it is 10 p.m. and I need to turn it all off.

Just relying on other people in my life to help me navigate my grief has been incredibly, incredibly important.

Also, I am a “list” person. That is something that has translated hugely into my grief.

Making lists and finding some control while navigating my grief has been hugely helpful for me.

Dani: When did you start to find strength after your mom passed? How did you kind of find yourself getting to those new rituals or routines –– like list-making?

Alicia Forneret: I mean, it took a while.

Right after my mom died, I spent a lot of time on the couch watching Gilmore Girls, drinking whiskey, just sort of processing things at my dad’s house. There were a lot of those days and weeks and months, and there were times where I would return to that just because it felt comforting and comfortable for me.

It was being able to say no, and draw those boundaries. That was a huge realization for me that I had power and control over how overwhelmed I was getting while I was grieving.

Alicia Forneret: Yeah, it definitely took time. It’s not like my mom died and I was like, “OK, I’m ready. I’m ready to take on the world. Yes’s, no’s, I know where the lines are!”

I would say, especially to the point about not feeling guilty about it, I think that’s one of the things that I struggled with most. That’s because when someone reaches out to you, for example, and they say, “I want to support you. I’m here. We can talk any time,” it felt at first really hard to say, “No, actually I don’t need to talk to you right now,” or “I don’t want to talk to you right now.”

And you can feel guilty saying no to someone who’s trying to offer you something that’s meant to be well intentioned and thoughtful and positive. It definitely took me awhile to figure out how to say no, but in a way that was a reflection of how I’m taking care of myself.

At the end of the day, what you should want is for me to be taken care of, whether that’s jumping on the phone right now with you or not.

So finding a way to not feel that guilt, it took time.

Dani: We just had a comment written in about what if people hold it against you?

Alicia Forneret: To the comment that just came through, the people who understand you and care for you and just want the best for you will not hold it against you if you tell them, “This is just not what I need right now.”

They’re the same people, hopefully when you do need something, they’re the ones that will be there and say, “OK, whatever it is, you just need to tell me or we can figure it out together.”

Dani: 100%. Also, with it being Mental Health Awareness Month, it’s important to realize that our culture has seen boundaries to protect our mental health or self care habits as negative things because people react to our boundaries negatively.

Alicia Forneret: Yeah. I think people take it as saying no means that you’re wholly rejecting someone. That’s how it can be perceived.

In my mind, if you make it clear that you’re appreciative of their efforts, being honest with them is really all that matters at the end of the day.

Dani: I love that. What are some resources and talks that you’ll be having throughout the next few days?

Alicia Forneret: It is going to be a wild week ahead!

Just for some context, I have run this before in person, in very small, intimate gatherings.

So over the course of Friday, Saturday and Sunday, this coming weekend, we’re doing everything that I could think of. We are going to be hosting movement events, so that includes everything from yoga to pilates. We’re running yoga in English, Spanish and French for people who are grieving.

Alicia Forneret: Yeah! It’s so exciting! I’m going to get really excited and geek out about all of this right now.

Then, we’ve got some more creative stuff.

One thing I’m really, really excited about –– because I’m excited about it all – is Shaina Garfield from Weaves with You will be hosting a ritual macrame workshop.

She takes people through a practice of learning how to weave and doing macrame while also meditating on memories of your loved one and using prompts to meditate while you’re actually tying the ropes.

So I’m so stoked to have guests like Hope Edelman and Claire Bidwell Smith who have been writing and working in this field of mother loss for a very long time.

Then, Megan Carmichael, who does work in the death and parenting space, as well as Susan Lieu who wrote a play called 140 Pounds about losing her mom, and she just had her baby a couple of weeks ago and was touring her play about her dead mom while she was pregnant!

And so the people that are going to be joining me this weekend are incredible, and I’m so grateful.We’re doing live podcast recordings. We’ll also be recording Shelby’s podcast Coming Back, and she’ll be interviewing Cheryl Strayed, which is really exciting.

There are just going to be so many amazing conversations.

We’re also doing stuff like cooking demos. So if you just need to come and learn how to cook something with somebody, and have a unique experience this weekend and sort of, for me, distract yourself while doing something nourishing, there are going to be activities for that kind of engagement and interaction as well.

Back to more articles

The Welcome Kit contains everything you need to pick out your diamond & send us your ashes/hair. Please be advised diamonds start at $2,999.

Tell us a little more about you and who you're looking into this for and we'll follow up with helpful resources tailored to you. Our team is here to help!